The Marpa Buddhist Centre was first established following courses run through the ‘Adult Education’ based in the Taree and Tuncurry. Scott Probst offered the first course and since then Peter Morgan has maintained it. Through this many have come to know  the centre. They first invited Lama Choedak in 1997, who has been teaching in the area  since then. Scott has left the area but returns periodically. The existence of this centre offers an opportunity to discover  the sane Buddhist  philosophy on how to live and give through the unity of compassion and wisdom. Damchoe Dogu Ling is the name given to the group by His Eminence Chogye Trichen Rinpoche. To honour this connection, the Marpa centre continues to work with and under the guidance of Lama Choedak Rinpoche.  We invite Rinpoche on an annual basis for teachings. Our spiritual connection remains strong with the centres he has established with loyalty, true friendship and respect. These qualities we cherish. (see link).
http://www.sakya.c(om.au/

Lama Choedak Yuthok Rinpoche is the founder of Sakya Losal Choe Dzong, Rongton Buddhist Training College and most of the Sakya centres in Australia.

Born in Tibet, Rinpoche escaped with his parents in the early 1960s to Nepal where he completed his secondary education.

He spent 12 years’ rigorous training as a Sakya Tibetan Buddhist monk, several of those under the guidance of His Eminence Chogye Trichen Rinpoche, one of the finest Tibetan teachers of this time (b 1920 – d 2007).

In 1980, sponsored by HH the Dalai Lama, Rinpoche completed a three-and-a-half year solitary meditation retreat on the Lamdre Lobshey teachings.

He has translated for some of the most important teachers of all four traditions of Tibetan Buddhism including the late tutors of His Holiness.

Lama Choedak taught and translated at Dorje Chang Institute in Auckland. He has also helped to design teaching programs for many Tibetan Buddhist centres in Malaysia, Singapore, Australia and New Zealand. 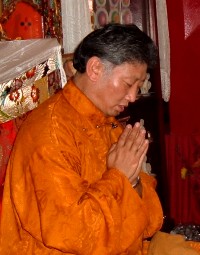 “Learning to cherish others will bring me happiness that will last.”

Rinpoche is one of the few Tibetan Buddhist Meditation Masters living in Australia.

He has been teaching meditation in the west for more than 20 years and has an excellent understanding of the western mind. His teachings are lucid, practical, enjoyable and sought after worldwide.

Rinpoche is based in Canberra.